I am excited to announce that my first sculpture, Into the Current, will be installed in the Vista Village near The Wave Waterpark on May 5, 2017. It represents the Great Pacific Garbage Patch* and the marine litter that gathers there due to circular currents in the Pacific Ocean that act like giant whirlpools, trapping plastic detritus and other debris.

The intent of the sculpture is to bring awareness to the problem of plastic pollution and the impact it is having on the ocean environment. The title of the piece, Into the Current, has a double meaning, alluding to both the ocean currents and the current reality of the health of our oceans.

5″ Scale Model of Into the Current

The three outer sections—or fins— represent the motion of the currents while the spiral and the circle at the center represent the swirling of the marine debris as it moves toward the “trash vortex.”

Instructor, Nick Scott, along with students in the Welding and Fabrication class through Mira Costa College’s Technology Career Institute are constructing the 5’ x 5’ structure out of steel round bar, rebar, and galvanized metal mesh. The addition of a bearing will allow the structure to spin in the wind to mimic the movement of the oceanic currents. 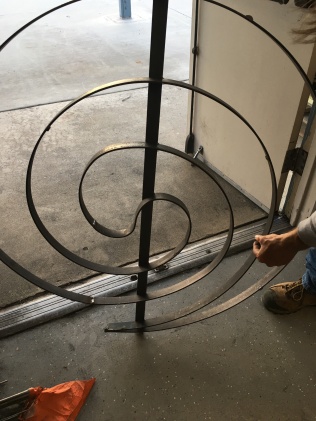 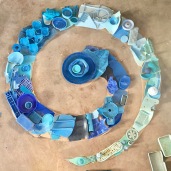 Most of the plastic used will have been collected from San Diego  and other California beaches, but others have contributed bits to make it a international effort, illustrating that people everywhere have a direct environmental impact. The things we do and the choices we make matter.

Beach plastic has been contributed by the following beach cleaners from around the world: